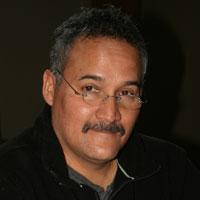 From the outside, everything looked fine – but it really wasn’t. Tim grew up in a home marred by anger, rejection, and abuse – and no one seemed to notice. As he got older, Tim thought about suicide. Rather than taking his own life though, he decided he would take the life of the one who was causing so much harm. But God interrupted his plans, and did something that would change everything for him… and his abuser.

The Storyteller is a 15-minute weekly radio broadcast and podcast featuring true stories from Native American – First Nations people across North America who are following Jesus Christ without reservation. Don’t be fooled, this is not some religious, feel good program. This is real life. It’s raw, direct and personal. If you’re tired of the way things are, or wonder if there really is hope for something better, you may want to listen to some folks who understand. The Storyteller can be heard by radio broadcast in over 600 communities in Canada and the US, and throughout the world via the Internet.

Herman’s trip off the rez – which was only supposed to be for two months – has turned into an epic journey of life transformation. God had a plan for Herman’s life. It was filled with purpose and adventure.