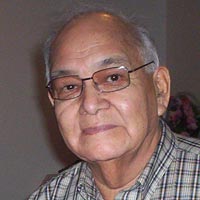 Ray grew up in northern Alberta.  As a young man he loved ball games, dances, and the pleasures of life – but nothing seemed to satisfy him.  Around that time one of his friends became a Christian and the changes in his life were unmistakable. Ray began to crave what his friend had. But the more he learned, the more he realized he was going to have to make a choice. He knew there would be a price to pay if he was going to follow Jesus. Ray’s story is one of counting the cost… something Jesus spoke of – but not something we hear much about these days.